I’ve started researching the history of 49 Kelsey Lane, Beckenham. At the moment I’ve just started collecting relevant documents and links. I’m using Notion to keep track of what I find and you can see my Notion database here. If you have any information that could be relevant please let me know. If you can put me in contact with anyone who has memories of this area I’d love to hear from you.

The plot of land that is now the house and garden of 49 Kelsey Lane was part of the Whitmore estate. Beau Lodge, which still stands to the North East of 49KL, is the remains of The Whitmores. The Whitmores can be seen on the 1894 Ordnance Survey map. On that map, approximately where 49KL now stands, is a rectangle. It doesn’t look like a permanent building, but it’s not clear what it was – maybe a walled garden, an animal enclosure, a barn or even a tennis court? I’d love to find out. 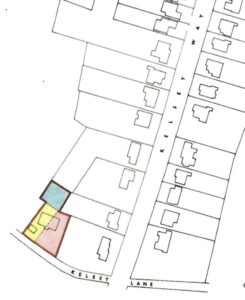 The land marked in blue on the above map was purchased on 4th June 1962. I think Kenneth Catterall Weekes purchased it from Royle Alan Gordon Wilson but it may have been the other way round.

The bungalow at 49 Kelsey Lane was built in 1970 on the garden of a house in Kelsey Way (that house had been owned at one time by the White family of R. White’s lemonade).

In 1999, 49 Kelsey Lane was purchased by Ian Gillies who added a conservatory and back extension.